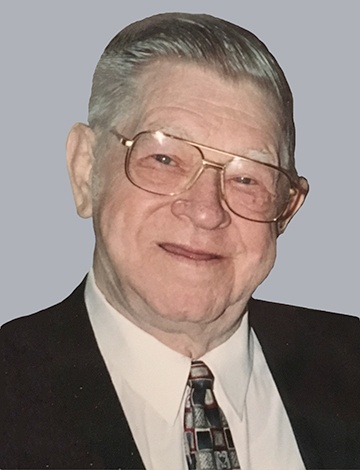 John Parker Williams was surrounded by his family when he went home to be with the Lord on Saturday, February 24, 2018 at the age of 91.  He was the son of Elizabeth (Lizzie) and John Parker Williams.  His father died at a young age and he was then lovingly raised by his stepfather Jefferson Hicks Williams.  His was the “baby brother” of Martha Nelson (James) Tillman, all of whom preceded him in death.

A retired pharmacist and lifelong resident of Humboldt, TN, Mr. Williams will be remembered for his ready smile, his warm greeting, his genuine kindness, and his generosity.  But, he will best be remembered for his love for the Lord and for his love and total devotion to his family, especially to his wife of almost 67 years, Barbara (Roote) Williams.  Their three children are Mary Key (Bill) Roe of Humboldt, TN, Jeff (Debbie) Williams of Ann Arbor, MI, and John (Michelle) Williams of Jackson, TN.

Following service in the US Army and graduation from the Auburn University School of Pharmacy, Mr. Williams returned to Humboldt, became a partner in the Crossing Rexall Drug Store, and married his bride.  After many years in his first store, he bought City Drug Co. where he had worked as a soda jerk while in high school.  City Drug moved to a larger location in 1981 where Mr. Williams worked and and continued to enjoy his customers until his retirement in 1995.

Active in First Baptist Church for as long as he was able, Mr. Williams served as a deacon and he was a Sunday School teacher in the youth department for many years.  He then belonged to the Barthel Gray Sunday School Class.

Visitation for Mr. Williams will be on Friday, March 2 from 11 - 2 at the Church at Sugar Creek (First Baptist) with service to follow at 2 p.m., also at the church.  Rev. Bill Rice, Kevin Hamilton, and Dr. Greg McFadden will lead the service of celebration and remembrance for Mr. Williams.  Interment will follow at Rose Hill Cemetery.

To order memorial trees or send flowers to the family in memory of Parker Williams, please visit our flower store.