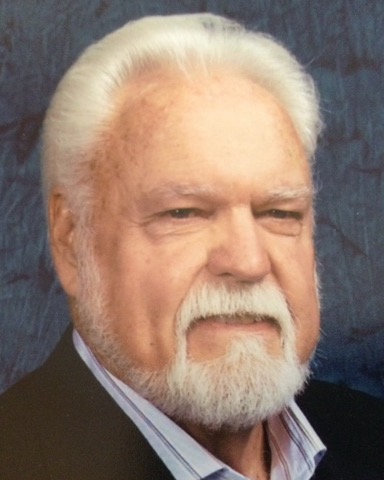 J. D., age 80, was born in Arvin, CA to the late Ralph and Evelyn Vaughn Brown.  The Brown family moved to Barstow, CA where J.D grew up.  He loved playing sports especially football. He was a graduate of the University of Redlands and was retired from law enforcement where he enjoyed a career as a sheriff’s deputy in San Bernardino, CA.  One of the highlights of his life was serving the Lord as a missionary in Iquitos, Peru.  J.D. and his wife Marcia moved from Oregon to Tennessee in 2018. Before his illness, he was active, and could frequently be seen on his mower or tractor.  He attended Northside Assembly of God in Jackson, TN.

He was preceded in death by his parents; sister, Billie Green.

Memorials may be directed to Alzheimer’s Association or Samaritan’s Purse.

Named for his paternal grandfather, Jesse Dannie Brown, J.D. was born in Arvin California in 1941.  His parents had moved to California from Oklahoma to find work.  When he was about a year old, his family relocated to Barstow, California where his father found work on the Santa Fe Railroad as a switchman.  J.D. grew up in Barstow with his two sisters, Billie Louise, 8 years older, and Darlene Marie, 8 years younger.  There was not an Assembly of God church in Barstow so his parents were instrumental in getting one started.  The services were held in their tiny little home until more suitable quarters could be found. J.D. according to his mother, was always active, didn’t like to play by himself and frequently got into mischief.  He tells of squirming in church because his mom has made his pants out of his fathers suit and the fabric was wool that he found itchy.  He got stuck in the fold up chair from all his squirming.  While he was in elementary school, he became ill with rheumatoid arthritis.  He could not move and had to be carried by his dad.  One evening while church members were praying for him in the living room, he got out of bed walked into the room and told his mom he was hungry.  That was his first healing by the Lord.  He got a job as soon as he could, and being big for his age, he was hired when he was very young by the owners of an A & W root beer stand before he could drive.  He was trusted by the owners to the point of covering the shop while they were gone, much to the distress of his mother.   His mom insisted he take piano lessons and later he played trumpet in band, but his music career came an end when he started playing football.  He loved the game and was offered a scholarship to Notre Dame that he declined.   He got work at the railroad before he finished high school and tells stories of the men helping cover for him so he could get a little sleep as he was still in school and playing football and winning was important to the community.  He continued on the railroad after graduation becoming the youngest conductor on the Santa Fe, but the routine of the railroad was too boring for him and he moved on to the San Bernardino County Sheriffs Department.  He loved that job.  After paying his dues working the jail, he worked in Big Bear, at the river, on the drug task force and routine patrol.  His colleagues described him as a man of courage and quick thinking.  He was the officer you wanted with you in extreme situations.  He was forced to retire due to high blood pressure in 1977, shortly after marrying Marcia in a magical ceremony in Hawaii.

While he worked in law enforcement, his daughters were born and he tells stories of their mischief and their love of animals.  The family had horses, a goat, dogs, cats and fish.  They lived in Rialto, Devore, Yucaipa, and Redding where JD worked a short time on the Redding Police Department before returning to San Bernardino.

After leaving the Sheriffs Office, he filled his time playing golf, but retirement did not agree with him, and his active, imaginative mind was always working on ideas to make money.  He built 12 different businesses from scratch on a shoestring; these ventures included pallets, packaging, transportation, security, ice cream, chocolates, yogurt, deli, real estate, advertising and loans.  He knew no fear, and would start things he knew nothing about learning as he went.  Once he got a business up and running, he would be bored and move on to his next venture.  Some were successful, others not so much.  During the years of business development, JD also decided to convert a commercial tour bus to a motor home.  This proved to be a blessing as it provided a home on wheels for several years.  After a huge business disappointment, the couple decided to go to Costa Rica to learn Spanish that would be an asset for Marcia in her career.  They applied to the Assembly of God Language School in Costa Rica and were accepted.  All of the students attending the school were preparing for mission service.   Classroom study did not agree with JD, but he loved going out in the city and trying his Spanish on anyone who would listen.  Shortly after arriving at the school JD and Marcia both felt the tug on their hearts to serve the Lord on the mission field.  They were accepted to a position as directors of a Children’s home in El Salvador.  The students at the language school all told them that they would not be able to obtain visas for El Salvador due to the recent war.  The couple applied anyway and in a matter of days received approval for travel to El Salvador.   Praising the Lord they moved on to El Salvador with limited language skills and several trunks of household possessions.  The stories that could be told would fill a book, but suffice it to say it was an adventure that required complete trust in God.  At one point JD became seriously ill, but the Lord brought him through.  Their limited language skills made things difficult, but JD was still able to talk local businesses into helping rehab the aging building that housed the children’s home, and a total make over and clean up commenced.  Eventually, they were led to move to Guatemala to concentrate on their language skills.  During that time, JD became interested in the local products that the different indigenous tribes created.  Once contacts were established, he brought the products home and sold them at craft shows and fairs, sharing stories from the mission field and supporting the craftsmen in Guatemala. While doing a Christmas fair in Biloxi, Mississippi, JD heard a radio announcement for a mission ship that needed volunteers.  The couple visited the ship and found out they were in need of Spanish speakers to help with the Central American volunteer crew.  JD jumped at the chance, but had some personal business to take care of before leaving.  The sail date for the ship was fixed and unfortunately, JD missed the boat.  Obviously that was not God’s will.  Later on, the couple was approached by a radio ministry out of Long Beach California to go to Iquitos Peru to work on the rivers, replacing a missionary who had started the work many years before.  They took a trip to see the boat owned by the mission and look things over.  What they found was a sinking, rotting boat and nothing more.  Instantly they said “no way” and had several really good reasons for not taking on this assignment. One by one, the “reasons”/ excuses were removed until all they could do was say “yes, Lord”.  They spent 3 and a half years in Iquitos and it was the highlight of their lives.  JD loved the challenge and thrived on helping the mission to grow using local pastors and workers.  They all learned to understand JD’s version of Spanish, but looking back he is sure it was the Holy Spirit that broke the language barrier.  He was healed of serious heart trouble in Peru, but eventually felt the urge to come home.  God cleared the path to get him home where he immediately went into the hospital for open-heart surgery.  After recovery, he was advised not to return to the harsh climate of the jungle and the ministry was turned over to other missionaries until eventually it was completely run by Peruvians and continues to be growing and spreading the gospel along the rivers and in the city to this day.

At this time, the bus was home and was parked on friends’ property.  During a trip to a conference for additional certification for Marcia, the couple acquired property in Oregon.

JD soon became restless and started working with a friend selling loans. He eventually went out on his own and mentored a young man with whom he formed a bond.  The couple was living in the bus until JD’s sister called and asked him if he could take care of his mother.  He quickly found a mobile home in Huntington Beach and remodeled it with the help of friends turning it into a lovely place with plenty of room for his mother.

JD moved to Oregon while Marcia continued to live in the bus and work in California.  She retired in 2007 and moved to Oregon, but retirement was short lived and soon she was contracting for work in California and living in the bus while JD continued to acquire Oregon property that always required work and improvements.  He took a young boy under his wing and Daniel became his sidekick for all of his projects.  As JD’s slowed down over the years, Daniel picked up the slack and it was a beautiful and very special relationship that continues to this day.

In 2018, the couple moved to Tennessee to property that JD’s daughter found for him.  JD loved the challenge of the property that had been unattended for years.

3 of JD’s daughters live in Tennessee, which allowed opportunities for him to spend time with them.

JD has four beautiful daughters, Tambra, Colleen, Carrie and Danelle, 9 grandchildren and 15 great grandchildren.  He loved them all.

JD loved the Lord and, although he spent several years of his life running from his calling, the Lord had plans for him.  He was healed at least twice in a miraculous manner, his cardiac bypass surgery that was supposed to last 10 years, lasted 22.  God used him in El Salvador and Peru.  He wasn’t a teacher, he wasn’t a preacher, he wasn’t a doctor or a dentist, he was an energetic, hard working idea man with boundless optimism.  He didn’t doubt, he didn’t question, he was all action and God used him as only God can.  He wanted to be out working to his last breath, as long as he could communicate he was trying to come up with the next business idea.  He wanted to speak of Jesus at every opportunity and his last meaningful conversation was about God and how he was ready to see Jesus.  He spoke of God to his granddaughters who came from California to help him.  God was on his mind and he would want anyone hearing his story to know that time is short and a better life is only possible through our Lord Jesus Christ.

He is at peace now and out of this world that had changed so much during his lifetime.  He no longer struggles with words, he can praise God without reservation, and if there is a patch of grass where he is now, he is out mowing it with a big grin on his face.