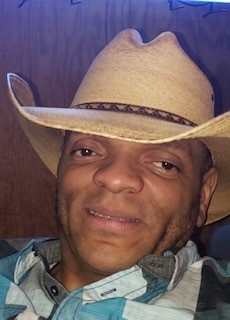 Gregory Todd Greene entered the stage of life on September 21, 1971, in Memphis, TN.

Greg lived life to the fullest. He will always be remembered for his soulful voice, wittiness, kind soul, crazy antics, and beautiful smile. He was well known in many different social circles. Greg lived his best life. He was born into a musically talented family. He showcased his talent alongside his longtime friends and music gurus in the band “The Reverend Greene and the Sinners”. He loved all genres of music and whatever he sang it was sure to be very memorable.

Over the years he worked in several job settings. He worked in the food industry for many years, construction, and then took a position with Federal Express as a ramp agent.

Greg decided to relocate to start a new life in the Hub City area. He found a slower pace and peaceful life here. During this time, he met his wife and made a home in Trenton, TN   He was employed by DET Distributing as a warehouse puller then advanced to supervisor. He gave up supervision and took a position as salesman.

Greg eventually gravitated back to music. He frequented local places and sang karaoke, where once again he captivated others with his smooth beautiful voice. Not only did he enjoy singing, but he also loved to ride his motorcycle.  He loved his family, his friends, music, vintage trucks, classic cars, and most of all his dog, Milo.

On October 22, 2021, Greg lost his life in a motorcycle accident.  At 10:45 pm he took his final bow and exited his stage called life. He transitioned into his Nirvana, his afterlife, his eternal peace.

He leaves his heart, love, and lifetime of memories to all.

Greg is survived by his loving wife, Paulette Greene of Trenton,TN.

Also survived by a special friend Renata Sadetsky and her son, Eli of Philadelphia, PA.   In addition to a host of nieces and nephews, aunts, uncles, cousins, and many friends.

According to his wishes, there will be celebration of life at a later date.

Preceded in death by his father, Herbert Greene; his stepfather, James Harbert; and brother, Bryan Greene.

To order memorial trees or send flowers to the family in memory of Gregory Greene, please visit our flower store.