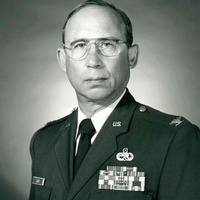 George the youngest son of the late Weldon C. and Frances Hunt Oliver of Humboldt, TN, was preceded in death by his parents and brother Weldon Jr.  He was born in Jackson, TN and raised in Humboldt, TN.  George graduated from the University of Tennessee in 1965 and received a master’s degree from Central Michigan University.

George was commissioned as a 2nd Lieutenant in the United Stated Air force in 1966 and rose to the rank of Colonel before his retirement in 1993 at Ramstein AB Germany.  He dedicated 26 years to military service in Aircraft Maintenance at various assignments throughout the world including tours in Spain, Germany, Italy and others.  His Air Force jobs took him to almost every corner of Europe from Norway to Libya and Turkey.  Following his retirement, he worked as a project manager for Lockheed-Martin in Texas and New Mexico.  He was a true American patriot having proudly served a tour in Vietnam in 1971.  His experiences helped shape him into the person everyone came to know and love.  He even had an advice column in the family newsletter called “Curmudgeon’s Corner.”

George was a lifelong Tennessee Volunteers fan who loved his team win or lose.  He liked to say he bled orange and Rocky Top was his favorite song.  He passed down a love for his favorite music, the oldies from the 60’s and 70’s and accumulated a vast collection of vinyl records over the years.  His favorite outdoor sports were fishing on local lakes, golf, and photography.  He may have been best known for his fondness of flea marketing where he never passed on a sale.

Of all the things George ever did, being proud of his family and helping other people was his passion. After he retired from the Air Force he wanted to “come home” to his Tennessee. In the community he gave his time to God’s Food Pantry, Senior Citizens, Boy Scouts of America, Haiti Mission, Air Force Association, and served various positions within the Rotary Chapter in Smithville.

George loved his family and they loved him. He was well known and respected around the community and his humor and presence will be missed.

In lieu of flowers the family asks that donations be made to: The Helping Hand of Humboldt.

To order memorial trees or send flowers to the family in memory of George Oliver, please visit our flower store.