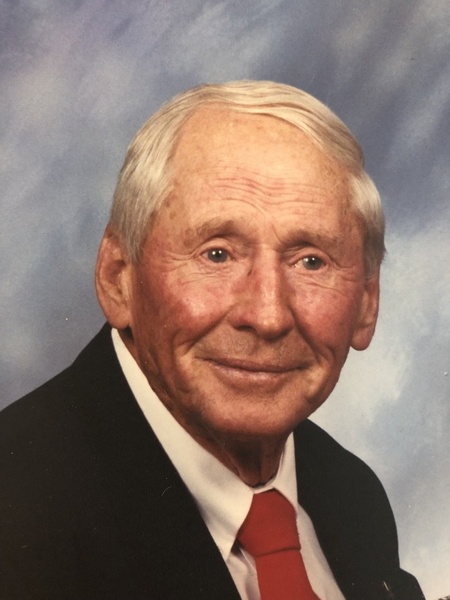 Funeral services for Mr. Clayburn Darby will be held 2 p.m. Tuesday, April 2, 2019, in the chapel of Replogle-Lawrence Funeral Home with Dr. Dale Denning, Rev. Mike Sellers, and Rev. Jim Moore officiating. Burial will follow in Centerville Cemetery with Military Honors. Visitation will be held Monday, April 1, 2019, from 5 until 8 p.m. and on Tuesday from 1 p.m. until service time at the funeral home.

He was born in Madison County to the late Jessie Horace Darby and Dezzie Leona Oakley Darby on August 31, 1919. He graduated from Medina High School in 1938 where he was the class president. Mr. Darby was a veteran of World War II having served in the U. S. Army. He grew up on the family farm where he was very active in the farming operation and worked at Milan Army Ammunition Plant in storage and the railroad where he retired from in 1987. Mr. Darby was a member of Chapel Hill Baptist Church where he had served as a deacon.

He is survived by his wife of 67 years, Naomi Vaughn Darby; son, Tony Darby.

To order memorial trees or send flowers to the family in memory of Clayburn Darby, please visit our flower store.