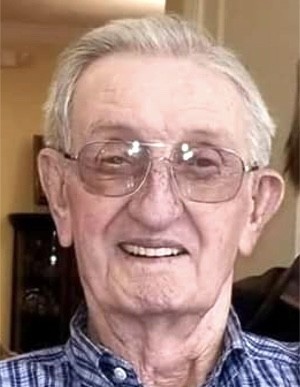 Charline “Gentle Giant” Moore, age 89, passed away peacefully Saturday evening, November 23, at his home surrounded by love. He was born to James Carl and Ruthie Erma Moore on May 29,1930 in Henderson County.

He accepted Christ in 1950 attending Chapel Hill Baptist Church. He served as Deacon for 48 years, along with many other responsibilities and committees.

He and Geraldine James married July 28th, 1951. They lived and were sharecroppers with “Woodland Farms” until 1986. Afterwards, he worked with Ted Jones Jr. Farms. Upon retirement, he raised his own truck crops until he could not physically carry on his labor of love.

“Gentle Giant” was so fitting. He was known for his gentle spirit, soft spokenness, love for the Lord, and such a man of his word with much integrity. When he spoke, friends listened with much respect. His testimony Matthew 6:24 “You cannot serve two masters: God and money. For you will hate one and love the other, or else the other way around.” Isaiah 64:6 We are all infected and impure with sin. When we put on our prized robes of righteousness we find they are but filthy rags.  Galatians 5:22-23 “But when the Holy Spirit controls our lives he will produce this kind of fruit in us: love, joy, peace, patience, kindness, goodness, faithfulness, gentleness, and self-control; and here there is no conflict with Jewish laws.

As hobbies, he enjoyed squirrel and rabbit hunting, he and his bride enjoyed the Daylily and Iris Societies as active members with over 700 varieties grown, truck crops, growing his prize tomatoes on their patio, Solitaire, Dominos, Facebook, taking rides with his bride, eating out with their friends, loving on his children and grandchildren.

He was preceded in death by their son, Randall Moore; a brother, J.W. Moore; a sister, Eulene Moore Jones.

In lieu of flowers, the family requests all memorials to be sent the Mustard Seed/Paul’s Kitchen of Milan or RIFA of Jackson.

To order memorial trees or send flowers to the family in memory of Charline Moore, please visit our flower store.